by Create a Kill 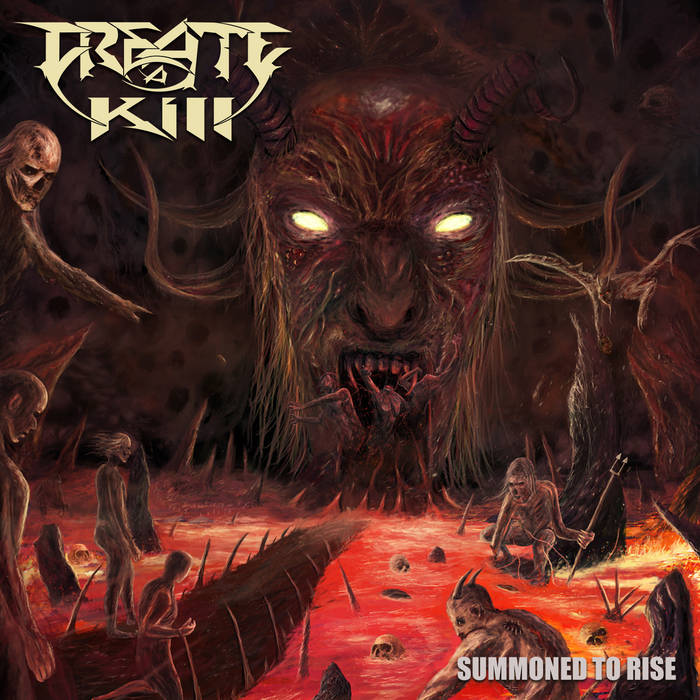 "Summoned to Rise features some of the fastest, catchiest, darkest, meanest, smartest, most intricate thrash fucking metal to come down the pike in years. No letup. No duds. Just a fiery, eponymous opening volley, and then one killer track after another straight on through the final assault of bonus track “Flesh, Blood and Stone,” a fist-raised tribute to the late, great Malevolent Creation frontman Brett Hoffman (1967-2018)."
- Decibel Magazine

"This is an album that badly wants to punch you in the mouth. Unlike others with similarly bad intentions, this one has a plan to do it."
- New Noise Magazine

"To get a better idea of what to expect, throw ancient Dark Angel, Exodus, Sepultura, Death, Devastation, Possessed, Exumer, Demolition Hammer, Kreator and similar 80s/90s acts into the meat mincer and the result is about what you can expect from Create A KILL. It is by no means original and innovative, but – and for the umpteenth time – those things are superfluous bullshit and means nothing to be. Because fucking hell, how damn good this sounds. The songs are full of fantastic, razor-sharp riffs and screaming solos that grab you by the ears with both claws and shake your head up and down mercilessly, give you a massive punch in the gut and a swift kick in the ass. If this doesn’t arouse your inner aggression, then you are simply not human. Goddamn, what force, what aggression, what energy. Like a ballistic bulldozer the band rolls over everything for three quarters and leaves a devastating impression. Not that they are constantly playing at high speeds, because there is also plenty of time for those typical mid-tempo pistils and slower, threatening passages that provide your journey to hell with an appropriate soundtrack, but because everything this band breathes is pure aggression. On vocal level we are served with hellish tones that sound like a combination between Zetro and Chuck Schuldiner, but also heavier death vocals a la David Vincent. Need I say more? This is old-fashioned death/thrash as it should sound, and proves once again why I ever started to love these music genres. The sound is also nice and old-fashioned, giving the album an extra, delightful, nostalgic vibe. Forget about all the modern shit that comes out as thrash and death metal nowadays; THIS is the real deal."
- Lords Of Metal


"Blending early thrash metal with the intensity of death metal, Create Kill’s new album is a raging eleven-track album that summons the demons of anger and hate to deliver a pulverising listen. There is no escaping the similarities between early Slayer, Kreator and the likes when you hear the opener, Create a Kill and the following Cold Blooded. That being said, this is still a deep and broodingly heavy listen that hits plenty of the right spots for those who enjoy their metal more extreme.
Decimate, Premeditated, Praise the Beast…it’s track after track of head-banging gold that demands nothing more then for you to lose you mind to the intensity. Something even the most stony-hearted metal fan will struggle not to do."
- Games, Brrraaaiiins, and a Head-Banging Life


"Old school Thrash Fucking Metal project featuring Daniel Gonzalez (guitars), Gus Rios (guitars/drums) and Alex Marquez (vocals), CREATE A KILL has unleashed their debut full-length, Summoned to Rise on the unsuspecting hordes and the result will be nothing short of TOTAL ANIHILATION! Considering the fact that the members of CREATE A KILL have bands like POSSESSED, GRUESOME, MALEVOLENT CREATION, SOLSTICE, DEMOLITION HAMMER and DIVINE EMPIRE on their collective resumes and you will have some idea of the Thrash Metal FURY this unholy trio is capable of. Each song has a unique identity and plenty of killer breakdowns, ripping solos and impassioned vocal attacks making Summoned to Rise a punishing and invigorating listening experience. Echoes of old SLAYER, KREATOR and EXODUS can be heard throughout this one making this a real treat for old-school fans and a lesson in violence for newcomers. (DH)"
- DOA Magazine

“Fast riffs, fast drums and overall power. If you’re a thrash fan like me, you’ll love this. The music is straightforward and energetic. No flashy experiments, but just straight up hard thrash, be it with some grind and death influence like excessive blast beats. What makes this album special is the different flavours of playing styles we get. The guys from Create A KILL managed to get a hold of some great guest musicians to make this album a sure hit. Summoned To Rise features Tobias Gustaffson (Vomitory, Cut Up, Amon Amarth) and Dirk Verbeuren (Megadeth, Soilwork) as drummers, vocals by Matt Harvey (Exhumed) and some guitar solos by Daniel Gonzalez (Possessed). With such big names, it’s no wonder this album reels you in right from the start.”
- GRIMM Gent


"Insane old school riffs for all your moshing needs, Jeff Hanneman style squealing solos (which made the hair on my arm stand up at points), brutal vocal deliveries that at times walk the line of really solid Death Metal vocals, and a ton of intense outstanding drumming throughout. Everything works on this album, from lyrical content, to the tone of the music, and of course that break neck pace the vast majority of the record offers."
- Hellbound.ca


"In a nutshell, the name of Create A Kill’s vicious game is thrash, and it’s a high-voltage rush — packed with immediately catchy riffing (sometimes jet-fast, sometimes geared toward triggering compulsive headbanging), squalling and shrieking solos, maniacal vocals, and spine-jarring drum and bass work. Your neck will get a good workout from this one."
- NO CLEAN SINGING


"Featuring members of Malevolent Creation, Gruesome and Solstice – this unstoppable supergroup was always gonna make an impact based on the line-up alone. However, little were our ears prepared for the onslaught that was to come on debut album Summoned To Rise. Not just in terms of pure fury, but also the sheer quality. The overall sound of Create A KILL is a perfect mesh of the previously-mentioned three bands, but with an unhealthy dose of Demolition Hammer injected into the death/thrash assault. This is raw, blistering, violent, nasty shit. And boy, do I love it!"
- The Metal Observer


" ‘Summoned to Rise’ is a an all out assault that takes no prisoners! Fast songs, brutal thrash and death metal riffage and blast beats…..What more could you ask for?"
- Metal Nexus


"Reflecting the heat of their Miami, Florida home, Create A KILL have issued a sweaty death/thrash debut here. Containing pistons-popping thrash and dive-bomb guitar solos out of the Slayer handbook, this will most certainly appeal to the hardened thrashers. There's a death metal rhythmic intensity present as well, giving it an early Sepultura vibe. Combined, this makes for one hell of an extreme outing that somehow reminds me of Sacrifice's debut (albeit better produced)."
- The Mighty Decibel


"CREATE A KILL pays homage to the forefathers of thrash, specifically those that would help shape the birth of what would become death metal. We talk bands like SLAYER, SODOM, POSSESSED, KREATOR and DARK ANGEL. The band was created by Gus Rios and Alex Marquez, but they have also invited some of their friends: Matt Harvey (EXUMED, GRUESOME), Tobias Gustaffson (VOMITORY, CUT UP, AMON AMARTH) Dirk Verbeuren (MEGADETH, SOILWORK) and Daniel Gonzalez (guest solos).
Well, this is definitely something for those of you who like the bands that I mentioned before. Try to sit still and not bang your head. Impossible!"
- Hard Rock Info


CREATE A KILL is a Thrash Metal band feauring Gus Rios and Alex Marquez (both former drummers for Death Metal Legends Malevolent Creation). Some of the songs were originally intended for Malevolent Creation, but once Gus left the band he decided to take his tunes with him which inspired the direction for what CREATE A KILL was to become. Paying homage to the forefathers of Thrash, specfically those that would help shape the birth of Death Metal, ala Slayer, Sodom, Possessed, Kreator, and Dark Angel, CREATE A KILL carve out a vicious collection of tunes that will make you want your bang your head like it's 1989!

Officially released earlier this year and plagued w/ distrobution issues and other unforseen circumstances, Gus reached out to his friends at Redefining Darkness Records (U.S.) and Raw Skull Recordz (Europe) to give the album a fresh take, this time with a Bonus track which acts a dedication to his fallen brother, Bret Hoffman, entitled "Flesh, Blood and Stone."

Interviews With Butcher Brown and Slauson Malone, plus LP of the week by SAULT.